People believe that the car is an efficient and economical mode of transportation. By calculating the effective speed of the car it appears that this believe is false.

Over the past fifty years the car has dominated the Dutch physical and imaginary landscape. More than 3 percent of the land area in the Netherlands is covered by roads (adding up the surrounding area that is affected (air quality, noise, nature) the space that roads take up rises above than 10%), people are spending more and more hours in the car and many cannot imagine having to do without it.

We think that the car due to its speed saves time. But when you are traveling by car, you not only lose the time it takes to go from A to B. You also have to work many hours to pay your car tax, insurance, maintenance and fuel. Moreover, you spend many hours in traffic jams and it often takes some time before you find a proper parking lot. Let alone the costs to society (medical care, construction and maintenance of roads, police, air pollution, etcetera).

The effective speed is calculated on the basis of the price of the car (costs per kilometer) and income (nett income). The amount of hours you have to work to drive your car (taxes, insurance, fuel, etcetera) is added to the average speed of a car driver in the Netherlands. (35 km/hour - 20 miles/hour) 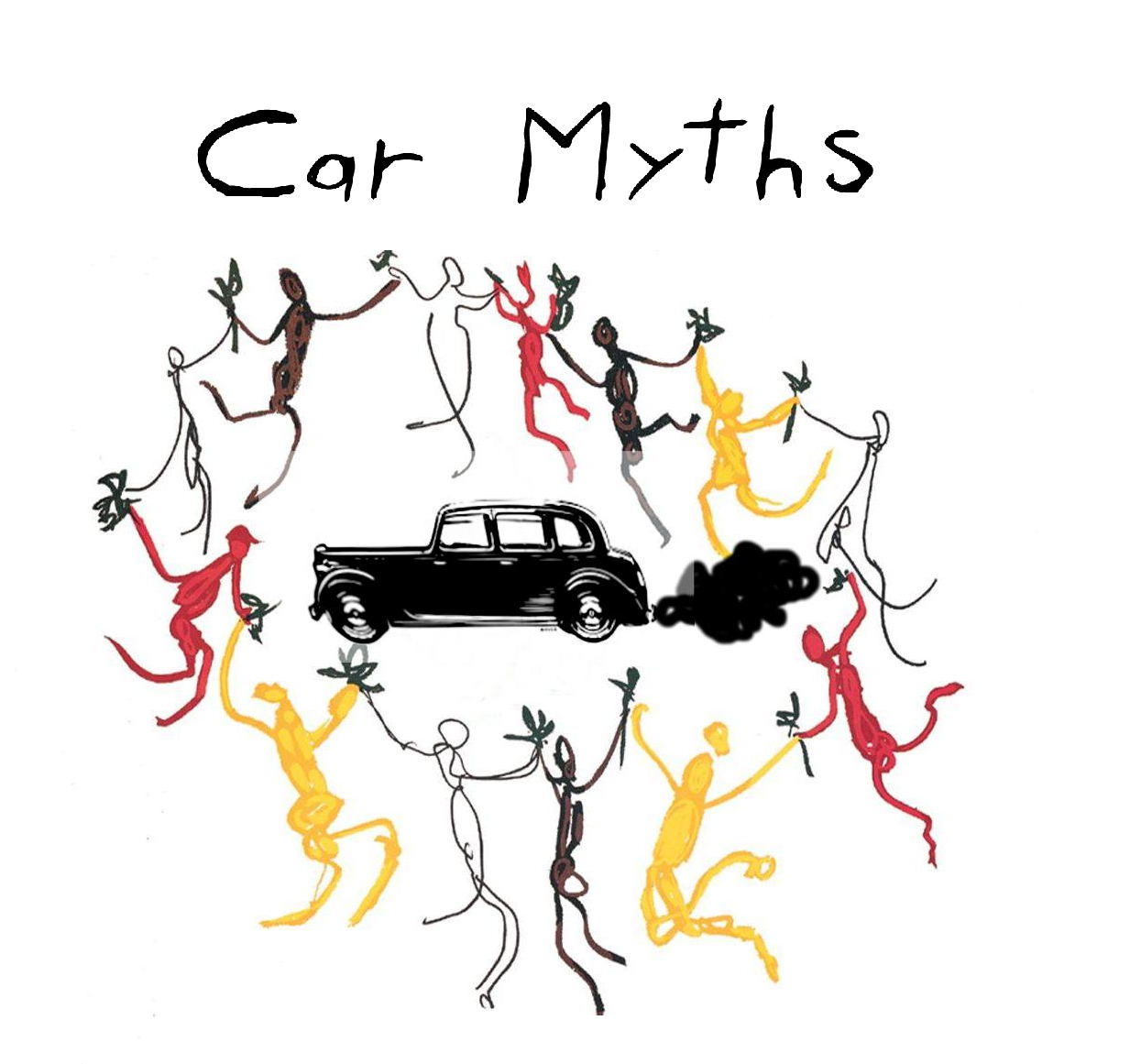 Infrastructure investments or subsidies benefiting car travel, such as the widening of highways, are often justified by predicted time savings. However, in many cases it turns out that faster transport and better roads will not 'spare' time. This has several reasons. Firstly, there is the effective speed of a vehicle. The 'time savings' resulting from a car ride from Amsterdam to Utrecht is partly offset by the financial costs of owning a car. Secondly, the increasing concentration of facilities outside of living areas make people travel further to get to a hospital, shopping center or to their job. This spatial reorganisation is made possible by the increase of car ownership but does not result in time savings for car owners. In the case of the job market, increased car ownership, results in more people qualifying for the same job, giving the impression that job opportunities increase. Yet, an individual in Amsterdam seeking a job is faced with a fiercer competition and is forced to look for jobs further away. Hence, the benefits of car ownership are not for those that own a car but for those that can demand longer journeys. According to the mobility check of 2010 the increase in the distance that workers commute and the fact that they have to travel more often is responsible for more than half of the increase in car use (growth 54% since 1985). Following this way of thinking, Professor John Whitelegg arrives at the claim that rapid transportation leads to "time pollution": it seems that fast transit saves time but what actually happens is that people have to travel and work more. Moreover, those that cannot travel at high speeds are excluded from work opportunities and leisure activities. While cars, planes and trains go faster and faster, the total amount of time allocated to transport does not decrease.

One kilometer highway easily costs tens of millions of euros. A stretch of 7 kilometers (the A4) between Delft and Schiedam even costs 100 million per kilometer. The Dutch government plans to invest about 25 billion euro's in the construction of new roads and the widening of old roads untill 2028. Meanwhile, the ANWB (the Dutch Drivers Union) holds that extra lanes does not decrease the amount of traffic jams in the long run: people cease thinking about alternatives.

It is often said that car drivers, through the taxes they incur, are the cash cow of the central government. In fact, it is the other way around: society is the cash cow of the car driver. Expensive infrastructure projects are not only paid for by their users, but also by individuals and households without cars (3 out of 10 households in the Netherlands). This is not only a waste of money for those without a car, but even detrimental to their mobility. By investing in the infrastructure for cars more services move to areas that are difficult to reach without a car. This leads to something called poverty of transportation. This phenomenon is likely to increase in the near future as the number of people that do not own cars, as the Institute for Transport Policy in the Netherlands predicts, only increases. The risk of poverty of transportation is particularly high among families with low incomes, elderly and others without cars. Those 25 billion euros injected in car infrastructure in the coming years will not benefit them. An aging population, increased urbanization (less space for cars) and the growth of young people not owning cars will make it necessary to think about others ways in which people can reach their destination easily. Also, in infrastructure planning, adverse effects of infrastructural works (diverting bicycle and pedestrian lanes) are not included in the calculation of predicted time savings. Even though, it is often the case that bikers and pedestrians have to go an extra mile because high speed infrastructure prevents them from taking the shorter route.
Nonetheless, one should not forget that also car drivers are duped by highways. For them it increases commuting time because facilities are located further away. id="pijp">Probably, children are the most vulnerable in relation to car traffic. The mobility of children, that is, the extent to which they can freely move around in their neighborhood, strongly decreases as the number of cars in the neighborhood increases. Already in 1972, the children in the Amsterdam "Pijp" understood this.

Traveling at high speed does not only require more energy but also a lot more space. A car traveling at 40 km/h (25 mph) will need three times as much space as a car going 10 km/h (6 mph). Also, by increasing the speed limit one increases the probability of traffic jams, as the required space per car increases. Hence, traffic jams are not the result of people driving too slow but of those vehicles that go too fast.

There are also many external costs not paid by the motorist but by the people around him or her. Noise and air pollution affects everyone. The cost of diseases as a result of air pollution are paid by society. Also, the severity of accidents increases exponentially with an increase in speed. A cyclist colliding with a car driving 30 km/h (19 mph) has a decent chance to survive, while a collision at 60 km/h (37 mph) is in most cases fatal.

According to Ivan Illich the remedy to the high costs in terms of environment, health, space, time, etc., is to slow down transportation. This runs counter to the economic way of thinking in politics and business but saves the individual and society time and money. If services would be located close to the people that use them, people would have to travel less and employment opportunities in areas where people actually live would increase. Fewer fatal accidents would occur and health benefits would be huge when more people choose cycling and walking over driving.

Fuel efficient and battery cfars save the environment.

For cars running on fossil fuel, scientists have calculated that today's internal combustion engines turns about 20-45% of the energy into movement. But this asserstion is, as the Australian professor Frank Fisher says, "criminally misleading". Most people don't drive to move their car around (which is 10 to 40 times heavier than the driver). So if you calculate how efficient your car is in what you actually want to carry (yourself and possibly some goods), the efficiency does not exceed 1%. If you also calculate the energy required to extract oil, refining and transporting it, to build roads, organize traffic flows, etcetera the efficiency drops even lower.

The same goes for the electric car. Firstly, the statement that they do not produce any CO2 emissions is false as the energy required for the electric engine often comes from fossil fuels (except in France where nuclear is the main energy source). Next to that, electric cars are often heavier than their fossil predecessors. The popular Tesla S weighs a total of 2000 kg and has a battery of about 500 kg. One fourth of the energy required to move the mass of the car is actually to move the battery around.

In addition, the materials which are typically used for batteries, such as lithium, cobalt and cadmium, are rare and difficult to recycle.

In the Netherlands there are almost 8 milion cars. In emerging economies, car ownership is growing fast. Given the limited resources available, including (renewable) energy sources, it is simply impossible that global car ownership (even if they are all electric) is tripled as the OECD predicts. Hence, alternative to individual car ownership have to be found.

Important to realize is that the pollution produced by a car is not a matter of outdated technology. Each transportation means heavier than its driver with energy sources external to it is harmful to the environment.
As Frank Fisher says, the solution lies not in the technology that might make a car a few percent more efficient. Instead, simple solutions are needed: driving a small used car could be 100% more energy efficient than dirving a new SUV. Another 100% efficiency gain can be achieved by having a second person in the car. These solutions require no extra research and money.

Of course, also a non-polluting means of transportation exists that is not dependent on external energy sources: the bicycle. The bicycle is easily 5 times lighter than the driver and the sole energy source is the driver itself. Compared with the Tesla an old fashioned bike is 100 times more energy efficient in moving the driver.

Ivan Illich (1926 - 2002) was a philosopher, priest, and historian who looked at the modern world with a critical eye.

According to him, the modern world is defined by mighty institutions that make the individual dependent and give her/him a feeling of impotence.

Because a lot of money is invested in the acceleration of transporation, the distances between facilities increase. People cannot do without a car to go to a hospital or a shop. This is what Ivan Illich calls the "radical monopoly" of fast transportation.

The human being becomes a slave to the car. Instead of helping the human being in getting somewhere faster, it obliges the individual to use the car more often and longer.

According to Ivan Illich the individual has to live this myth, even though the car never delivers the time savings it promises.

This is not a project aimed at nailing the motorist, putting technology aside as "bad" or to label or put the car away as polluting.

It is an attempt to make the visitor think about the impact of the speed of vehicles and the infrastructure built for it on his or her life. Roads have been built in the name of employment, electric cars marketed as sustainable innovation and e-bikes are seen as energy efficient. Rarely has the question been asked whether the individual or society as a whole benefits from faster and more efficient transportation.

Ivan Illich asked this question in the books "Tools for Conviviality" and "Energy and Equity". The inspiration for project came from these two books.

Sam de Vlieger designed the website and provided the content. The photo of the A2 at Zaltbommel was taken by landscape ecologist Hans Farjon. The titles are designed by Federico Andreotti.

Short article on Ivan Illich in "The Guardian"

Speech on speed by Ivan Illich in Amsterdam

Do you have questions, critique or suggestions, please send them to info@deautovanivan.nl.